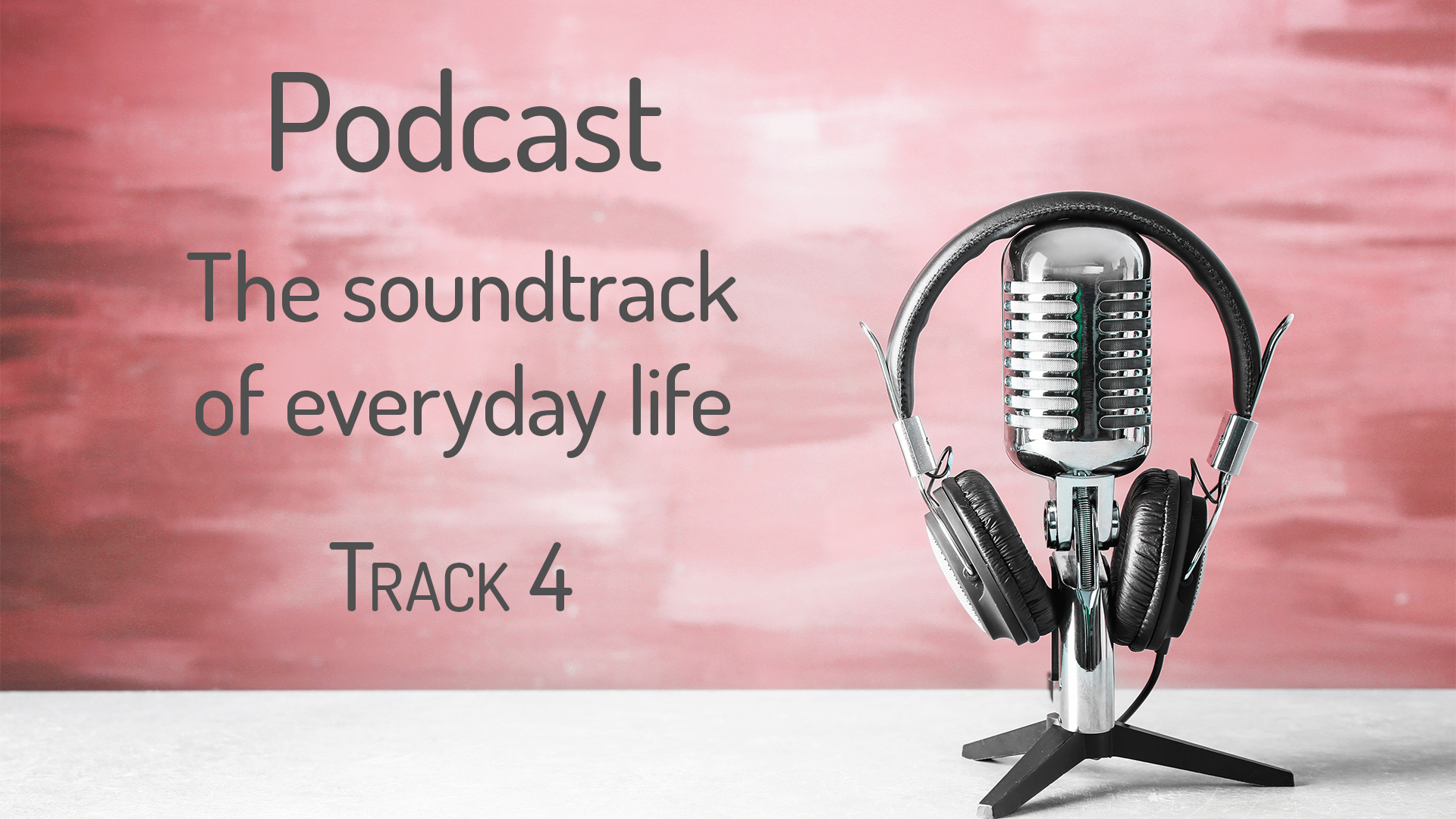 Our idea of podcasting usually only contains microphones and headphones. But in reality, there are much more technical finesses required by the medium than you can imagine or even hear. The fourth part of our series is about the things that happen before and after the recording. These things make a podcast a prime example of modern media production.

Good music albums have the peculiar quality that you can completely lose yourself in them. As soon as you hear the first good tune, you forget everything around you as the music takes hold. There is no room to think about the interaction of the individual instruments, the recording situation, the commercial success of the album or other details. Only later, when the initial enthusiasm is gone, can you reassess the music and come to the conclusion that it was the perfect combination of details that made the album so great. And allowed it to become the ideal soundtrack for everyday life.

On the (audio)track for success

With podcasts, this question is all the more urgent. Because their dynamic nature they embed themselves in our daily routine seamlessly, they are often consumed secondarily and thus not analyzed further. Additionally, they receive little cultural attention. The production of music and books has inspired many other artists, while podcasts are heard and then often fade into the abyss. What exactly is a podcast? What role does the platform play? And how do I even measure whether my podcast is successful? Answering these questions, we would like to make the medium of podcasting more tangible. Because only those who understand their environment have a good chance of mastering it.

Question: What exactly is a podcast?

As we saw in the first part of the series, among other things, the word "podcast" is becoming more and more familiar to people. It is usually associated with audio files that can be subscribed to, downloaded and consumed via the Internet. The important thing is that they need to be available on-demand and outside of fixed times unlike in TV or radio shows. Additionally the content is published as a series and not as stand alone pieces. These are principles that apply to every podcast.

To quote the Bible, in the beginning was the word, and in this case specifically: the recording. The audio file can be fed into an RSS feed, which lays the foundation for all further steps. The feed makes easy access and endless upload possible, the core competencies of the podcasting medium. Finally, it needs a platform on which people can  subscribe to and access them. And this is where a provider comes into play, who has faithfully supported the podcast since the beginning of its success: Apple with iTunes.

Platforms: Where can I be found?

The importance that Apple plays for the audio format as a whole, can hardly be overstated. Not only was the medium named after one of the company’s first mass product, the iPod (and the back part from "broadcasting"), it also created a central platform for uploading and downloading new episodes with iTunes or later Apple Podcast. This platform still exists today. Even though many other platforms are now used for podcasts, the majority always falls back on the feed that lies with Apple. Thankfully this service is provided free of charge and with no major restrictions regarding content and technology. So there's no way around Apple Podcasts. But that doesn't mean that the distribution work is over. After all, other platforms have also gained importance over time. We present the most relevant ones here:

Google has now created a complete digital infrastructure that almost no one can do without. In Europe, its podcast service is becoming increasingly important. And has the added benefit of being found more easily via search engines. It is very important to add your own podcast to this site. By the way, on our blog we explain why good online networking of content is so important.

The Swedish company is partly responsible for the current podcast boom. For many listeners, Spotify serves as the main platform. After all, it saves time you need for switching from app to app. Nevertheless it’s worth mentioning that Spotify's focus on exclusivity and an externally closed paid platform contradicts the key elements of podcasting. That’s because Spotify's content cannot be accessed from the outside without an account, nor can it be embedded in your own player. But who can afford the luxury of neglecting 96 million paying users (number from 2018, and rising) and turning their backs on one of the most promising platforms of the future? Although competition of new providers is increasing, no podcaster will be able to get past the platform in the foreseeable future.

The French company has 14 million users and is thus significantly smaller than its competitors such as Apple Music/Podcast or Spotify. And yet the provider is attractive because it uses a different tactic: individualization. While Spotify focuses primarily on advertising for non-paying customers, Deezer generates 90 % of its revenue from subscriptions and thus relies more on its own ecosystem. The smaller, but very active, self-contained system could make the platform particularly interesting for podcasters whose focus lies on the niche.

Here, music is nowhere to be found. The service, which can be used via app and website, has focused entirely on podcasts and news, and has thus became a sanctuary for radio and on-demand shows. Stitcher is free and carved out it’s place as a noteworthy player alongside competitors such as Amazon and Spotify, especially when it comes to podcasts. Interesting especially for English content and a news-savvy audience.

These two providers are representative for the overall market of podcasts, which is dynamic and highly competitive. Many new platforms are still fighting over newly emerging target groups, many are experimenting with subscription models à la Spotify. The Danish startup Podimo, which launched in Germany just in November, describes itself as the "Netflix for Podcasts" and focuses on a mixture of non-exclusive content as well as content that can only be listened to for a monthly fee. Luminary, this time an American startup, follows a similar path, but offers on more exclusive content: The content of Late-night host Trevor Noah and Lena Dunham, producer and writer for Girls, is only available on Luminary. How successful both providers will be with their aggressive launches is hard to say.

Theoretically, your work could be done with creating an RSS feed and embedding it in iTunes. But it's not that simple – as this short platform overview shows. The podcast market is still relatively young, and there is a lot of competition in its future. This makes a clear answer to the question of which platforms are indispensable for podcast distribution so difficult. If, as in content marketing it’s often the case, a rather broad appeal is the goal, a fixation on one platform seems less sensible. In the end, the intended impact is what counts! Exclusivity can provide for a small but very responsive audience. Broad distribution on several platforms for strong mass distribution. Format and target audience will make this decision. But one platform is undoubtedly necessary: your own.

The substantial competition within the podcast sector makes focusing on just one medium unprofitable. Because podcasts work best in an existing media system that allows networking amongst each other. No matter where else a podcast can be found, it should always work and be listenable on your own website.

There are three simple reasons for that:

Why you can (not) measure success

Books have sales figures on the book market, success of music is determined by sales and streams, films are measured by their box office success and DVD sales. Podcasts have nothing to measure their comparative success. Well, almost nothing. But where other media can base their performance on reliable measuring instruments, podcasts often must attempt to peer into the crystal ball. The reason: The platforms are reluctant to share secrets and keep precise statistics to themselves. Fest & Flauschig with Olli Schulz and Jan Böhmermann is the most successful podcast worldwide. How do we know that? Well only from Spotify itself. Without giving exact subscription or view counts. And even the iTunes charts that measure success are not very transparent. A real dilemma for both the podcasters themselves and for the analysis.

This leaves each producer with a single reliable reference value that can be read off without further ado: the number of downloads. But even this number only vaguely indicates the success of a podcast. After all, a downloaded episode can be far away from  being heard. So is it completely impossible to adequately and meaningfully determine the success of your own podcast and thus your own efforts? No, because:

...times are changing: The providers have heard the call of the podcasters, Spotify  recently provided statistics at least for the producers themselves. New providers promise to offer more accurate tools.

...there is external help: Sites like Podbean, Podtrac or Anchor generate data about the performance of a podcast, sometimes for free. Even detailed KPIs can be acquired this way.

...listener numbers are not everything: Interactions, subscriptions, reactions in the form of comments. Also the media you own allows statements about the distribution of a podcast.

What does success mean?

The answer is that this question can only be answered individually. Because if success only means being the new viral podcast, the objective must be reconsidered. Because a format must first meet its own requirements before it can be measured against the general market. Instead of wanting to achieve big mass appeal, you should ask yourself other questions:

Podcasts: Much more than start and stop

If you only wanted to talk into a microphone for once, you can record voice memos. Because podcasting is much more than that. The question, on which platform you want to appear with your content, is a tactical one and not so easy to answer. Basic consideration should be included in every concept from the very beginning. It must fit the specific objective and may even influence the content. But even when this is done, the process is not over. To evaluate a podcast, you need a basic knowledge of KPIs and some interpretive sensitivity. That sounds like a lot of work.

And it is! But it's different than at school: Because in podcasting, technical and theoretical knowledge pays off immediately! And in the next part of the series you can gain an insight into the podcast production of Content Glory.

Track 5: Reports from the Content Glory audio factory
To blog overview
Follow me! Out of the crisis